With a view to encourage, inspire and express thanks to the Safai Karmacharis (cleaning staff) of the state for their share  of contributions in fighting against the world-wide pandemic of ‘Coronavirus’ (COVID-19), Chief Minister Mr. Vijaybhai Rupani today using the CM Dashboard and Civic Centre made chitchat with as many as 10 cleaning personnel of Gujarat.

During his interactions with the cleaning staffers, the Chief Minister praised their services and sincere dutifulness to protect the citizens of state in this testing time and thanked them on behalf of the people of Gujarat.

During his talks with one Mrs. Dinaben Nareshbhai Vaghela, a Safai Karmachari of Ahmedabad Municipal Corporation, Mr. Rupani said that your works in this difficult and testing time is really appreciable.

The Chief Minister also urged the cleaning staff to take care of their own health as their health is directly linked with the health of citizens of Gujarat.

Talking to Mrs. Kantaben Chandreshbhai Jadav, safai karmachari of Petlad Nargarpalika, Mr. Rupani stated that due to their works the people of Gujarat are safe and secure against the deadly Coronavirus.

All these cleaning staffers also expressed their feeling of gratitude and satisfaction that Chief Minister Vijaybhai Rupani spoken directly with them.

Rs.25 lakh in case of death on duty of employees engaged in curbing COVID-19: CM 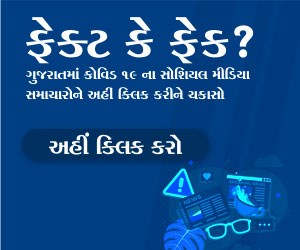 This portal is all attempt to help identify false news/ misinformation concerning corona virus and to promote dissemination of authentic information related to corona virus as far as possible.